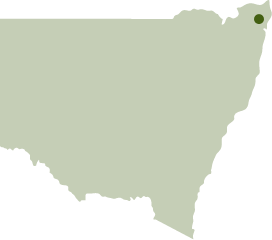 Bush regeneration to control weeds improves the breeding habitat of the Southern Pink Underwing Moth over 500 ha while also assisting recovery of critically endangered lowland rainforest of subtropical Australia and habitat for over 28 other threatened species.

Surveys for Southern Pink Underwing Moth larva are undertaken in the breeding season at known locations of host plant, Carronia multisepalea. Surveys contribute to knowledge of the species and its trajectory which assist with future management.

Survey and mapping of locations of the host plant, Corronia Vine, are underway in Big Scrub rainforest. Bush regeneration works have commenced to restore habitat in areas of Corronia Vine.  It is expected that surveys for Pink Underwing Moth larva in coming months will provide further information about the distribution and ecology of this rare species to assist with future management.